Toyobo and Dutch bioventure company Avantium have agreed a deal under which Toyobo will manufacture polyethylene furanoate (PEF), a 100 percent biobased resin that has qualities similar to polyethylene terephthalate (PET), but which exhibits higher barrier performance than that of PET.
The oxygen barrier efficiency of films and bottles made from PEF is 10 times higher than PET equivalents, while water vapor barrier efficiency is twice as high, potentially opening new horizons for the material’s use. Toyobo also plans to manufacture thin films made from PEF.

PEF is made by polymerizing furandicarboxylic acid (FDCA)—produced from biobased carbohydrates (sugars) using Avantium’s technology—and ethylene glycol, which also is biobased. Conventional PET is made by polymerizing terephthalic acid (PTA) and ethylene glycol.
Most PET products currently on the market are made from petroleum-based PTA and are therefore not 100 percent biobased. As research into making PTA purely biobased has progressed, Avantium has succeeded in developing the technology to efficiently produce FDCA—which has a structure similar to PTA—from carbohydrates, thus unlocking the door to the production of 100 percent biobased resin.
At a time when Avantium is attracting widespread attention from various quarters, Toyobo has forged the partnership with the Dutch company on the strength of Toyobo’s unique, state-of-the-art knowledge and manufacturing capability in this area. The two firms have previously interacted over PEF polymerization. 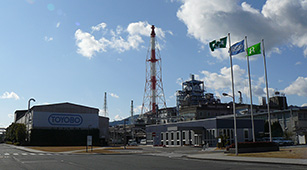 The Iwakuni Plant, which conducts polymerization

Based in Amsterdam, the Netherlands, Avantium is a state-of-the art chemical technology company operating in the field of renewable resources. The company is headed by Chief Executive Officer Tom van Aken.