Toyobo Co., Ltd. will next year start manufacturing and selling XENOMAX®, a heat-resistant polyimide film whose dimensional stability is among the world’s best for this kind of film, by setting up a joint venture company with Nagase & Co., Ltd. and building a plant in Toyobo’s Tsuruga Research and Production Center in Fukui Prefecture. The product’s dimensional stability is equivalent to those of glass and silicon wafers.

XENOMAX® will be produced and marketed for use in organic electroluminescence (OLED) and other flexible displays and sensors, in addition to electronic paper displays, for which manufacturers have already adopted the product as an electronic circuit substrate material. 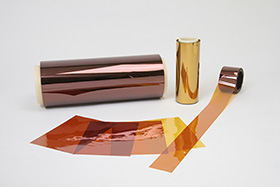 Polyimide film is a kind of polymer film that has a robust molecular structure. Thanks to its highly heat-resistant and insulation properties, they have been used as insulation films, mainly for electronic circuit substrates.

Thin-film transistors (TFT) and other electronic circuits for use in displays and sensors have conventionally been built on glass materials, because the substrates must withstand the high temperatures involved in the manufacturing process. Displays and sensors have become lighter, thinner and more flexible in recent years, prompting a surge in demand for thin, easy-to-bend polymer films on which electronic circuits can be built. Such polymer films must be heat-resistant and dimensionally stable, which means they do not deform, shrink or stretch when subject to the same level of heat for making TFTs on glass substrates.

With a coefficient of thermal expansion (CTE) of about 3 ppm/ºC in environments ranging from room temperature to as high as 500ºC, XENOMAX® has a dimensional stability that ranks among the best in the world for a polyimide film. To achieve this, Toyobo fused a technology developed by the Michigan Molecular Institute (a U.S. research facility), for which it holds the exclusive license, with Toyobo’s own technologies to synthesize heat-resistant polymers and make films. The resultant new technology is capable of making a polyimide film that has the dimensional stability equivalent to that of glass substrates, a feat long considered to be impossible. Toyobo’s research arms, mainly the Corporate Research Center, succeeded in commercializing the product, which is used as a substrate on which a TFT is built, while subject to temperatures ranging from 400ºC to 500ºC. The product has been manufactured at a pilot plant at the Corporate Research Center, and used as a TFT substrate for electronic paper displays.

Toyobo will establish a joint venture company with Nagase to manufacture and sell XENOMAX® in the first half of fiscal 2018, while setting up a plant to manufacture the product at Toyobo’s Tsuruga Research and Production Center. The product will be marketed in response to growing demand for TFT substrates to be used in electronic paper displays. The thin, light, bendable and virtually unbreakable XENOMAX® films are excellent substrate materials that can replace those made of glass, silicon wafers and ceramics—including TFT substrates for flexible OLED and sensors. Toyobo aims to expand their sales in these areas.

In collaboration with Nagase, Toyobo aims to swiftly create a ¥10 billion business by responding to high demand for highly functional, heat-resistant films.

Rendering of New Plant of “Xenomax®”

Outline of plant to be built