Toyobo Co., Ltd. has productized a ribonucleic acid (RNA) analysis kit based on a novel system titled RamDA-seqTM*1, that allows full-length sequencing of the total RNA of a single cell. The Laboratory for Bioinformatics Research at the RIKEN Center for Biosystems Dynamics Research developed this method last year. 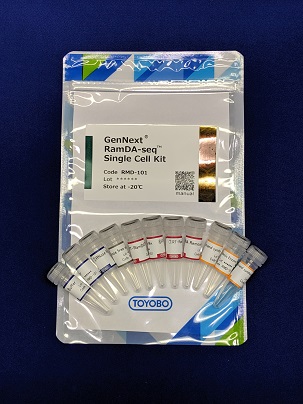 As national health insurance programs in Japan have covered genomic medicine since June 2019, medical care is progressing to be tailored to individual patients by selecting suitable treatment and drugs after analyzing a patient’s genes. In recent years, genetic information in a single cell has proven to be effective in treating diseases such as cancer caused by gene mutations, because each cell has different genetic properties. However, conventional methods have been unable to reliably detect disease-causing mutations from an extremely small amount of RNA*2 derived from a single cell.

RIKEN, which is based in Wako City, Saitama Prefecture, is one of Japan's largest scientific research institutes. RIKEN has developed a novel method, RamDA-seqTM, which enables the amplification of RNA in low bias and the detection of an expression level of genes in a single cell. This method allows the comprehensive identification of RNA varieties and their amounts in a single cell. It drastically improved the analytical precision of a disease-causing gene expression level and mutations in various RNAs, including non-polyadenylated RNAs whose functions remain unclear due to the difficulty in their detection.

RNA Analysis Kit, which Toyobo productized under RIKEN’s technological guidance, consists of reagents and a user manual necessary to conduct RamDA-seqTM. The kit makes it possible to prepare samples more smoothly and stably, as described in articles published by RIKEN.

The kit is expected to expand the use of RamDA-seqTM, to accelerate the development of various medical fields ranging from basic research to regenerative and genomic medicine. Toyobo will launch the product for research institutes including pharmaceutical companies developing drugs for cancer and other diseases on September 30, 2019. The company aims to achieve annual sales of \1 billion in fiscal 2022.

■RNA Analysis Kit to be marketed

The cells that constitute our bodies control its gene expression to perform various functions, while having almost the same genetic information. Since this gene expression is mediated by molecules called RNA, a comprehensive analysis of RNA is effective in understanding the individual characters of individual cells.