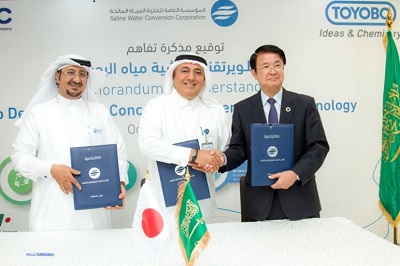 In the Middle East, where rainwater and groundwater are scarce, many seawater desalination plants operate to make drinking water. Saudi Arabia has a high demand for desalination plants due to the harsh weather conditions and the nation’s growing population and economy. Since the 1980s, Toyobo has provided its hollow fiber reverse osmosis (RO) membranes for desalination plants in the region. These membranes produce about 1.6 million tons of fresh water a day – enough to meet the needs of 6.4 million people.

Following the MOU signing, Toyobo, SWCC and AJMC will start operating pilot test unit at SWCC’s seawater desalination plant in Al Jubail soon. The three parties aim to put the technology to practical use as soon as possible by comprehending the membrane’s basic properties and building expertise in operation of the equipment.

SWCC, which has focused on developing revolutionary technologies to treat concentrated seawater, is determined to address environmental burdens that concentrated brine from desalination plants impose on the sea. This endeavor to establish a sustainable seawater desalination technology is highly anticipated in Saudi Arabia’s “Vision 2030,” a plan to diversify its economy and develop public sector services. Toyobo will help develop and make practical technologies through the use of its membrane technology, which has crafted an excellent reputation over the years.