Toyobo Film Solutions Ltd. (TFS) has developed a sealant based on its Teonex TM for fuel cells* to be equipped in fuel cell vehicles (FCV), and the product was adopted in the latest model of the Mirai eco-car, which Toyota Motor Corporation began selling on December 9, 2020.

The new model of Toyota’s Mirai 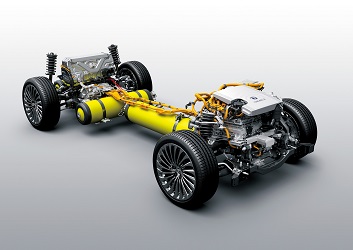 Teonex TM is a high-durability and heat-resistant polyethylene naphthalate (PEN) film, for which TFS has virtually the entire global market share. The product is increasingly being adopted for vehicle parts. The new sealant is made by coating a unique adhesive to Teonex TM, along with precision processing. The product can provide various functions, such as the protection of power generation surfaces of fuel cells, insulation and shape retention for gas intake and exhaust components, in addition to joining components to make fuel cells.

Toyota has evaluated the new sealant for realizing high durability in demanding environments, a key factor contributing to the long-term integrity of the fuel cells, and decided to use the sealant for the new Mirai model. Moreover, thanks to the newly developed adhesive and other factors, the new sealant makes it possible to join components at higher speeds, resulting in a drastically shorter per-cell production time.

TFS will contribute to the realization of a healthy and sustainable society through provision of the sealant for the Mirai model, which is expected to be widely used as the ultimate eco-friendly vehicle, powered by hydrogen and emitting only water while in operation.

This is a highly durable and heat-resistant film with excellent mechanical strength, electrical insulation properties and cost effectiveness, which can be used in the same ways as polyethylene terephthalate (PET) films. It is expected to meet new demands of the market.